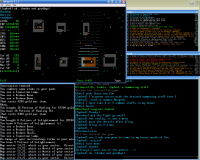 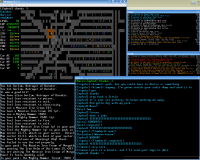 "Die Jelly, DIE!!" (3rd Feb 2008)
A group of low level adventurers descends into the dungeon. We watch them as they conquer the first and second level of the dungeon, slaying evil beasts like the yellow mushroom patch and a huge pack of cave spiders. Not even the unique monster 'Grip' could resist the power of this experienced team.

"A tragic end... "(3rd Feb 2008)
The party "Die Jelly, DIE!!" has reached the 6'th dungeon level, 300ft and as the experienced player might notice right from the start of this clip, disaster is imminent: a mage is running ahead of the group... a single mage in the front line of battle...

"KING Kaze" (13th March 2008)
The High-elf mage Kaze takes on Morgoth. The last defeat of Morgoth by a mage before Mage's lost GOI.

"Zoo of Concentrated Death" (24th March 2008)
A brave Warrior finds himself at 1700 feet, staring at a vault with many shiny things inside... This ten minute movie has everything - epic battles, incredible treasures and fine strategic work by both monsters and players :)

"Knock Knock!" (19th March 2008)
Knock knock! Who's there? Well, bump into them and you'll find out. It was a beautiful day outside so everyone was inside playing MAngband.

"MAngband isn't only about rations and water..." (21st March 2008)
Sometime you've just spent too long in the dungeon, you're sick of rations, water and slime mold juice. What do you do? You feel... Adventurous.

"The Chest Empire" (30th March 2008)
One of the most popular features in MAngband 1.1.0 are the player shops. Or the casinos, as some would call them.

"The Early Adventures of @" (31st March 2008)
The first day of MAngband 1.1.0, we follow a young adventurer as he descends into the dungeon, finding friends and foes.
Long movie. Recommended watching!

"Warrior and Zal partying" (3rd April 2008)
The brave adventurers Warrior and Zal went diving one day, on their way to 3500 they stop at 2700, fighting unique monsters and generally just getting into trouble. Pay attention to the extremely poor design of the tunnels.

"Perfect irony! (Can YOU see the ring?)" (8th April 2008)
This movie is more than just another awesome battle with suicidal priests. If you pay attention you should get a laugh out of it as well :)

"Sudden Wealth" (9th April 2008)
So what happens to adventurers who stumble across heaps and heaps of money? Well. I think you know.

"Merry Go Round" (10th April 2008)
You know how it is, you go down the dungeon, see something you want but suddenly a badass monster decides to stand in your way. What do you do?
Yes, you take it for a trip on the merry go round.

"The final dive" (10th April 2008)
Diver had a good life. A short life. This brave adventurer was fearless, yet - he could not resist the final darkness...